This is the page where the embarrassing pictures of me when I used to act are. 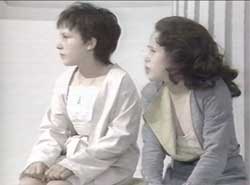 From ‘Mawdryn Undead‘ episode of Doctor Who, as Young Tegan. I am on the left, wearing a wig (my hair was long). Next to me is Lucy Benjamin, best known for playing Lisa in the Enders. Our wig fittings took longer than the filming itself. BUT WE GOT TO SIT IN THE TARDIS which was really exciting, and poke things on the console. The appearance itself lasts about ten seconds. 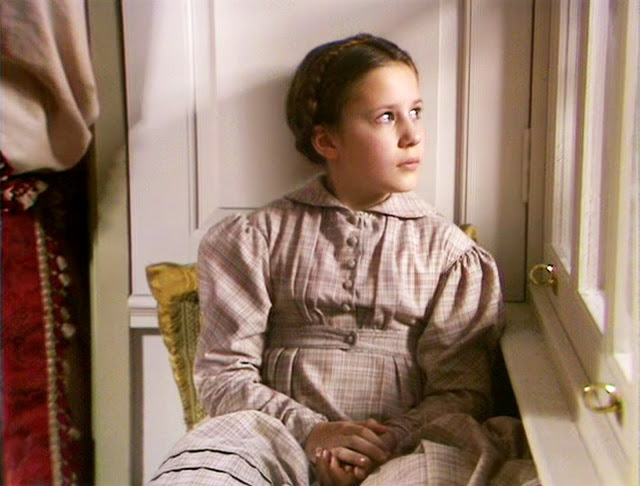 As young Jane in Jane Eyre, a BBC production (1983). I did a lot of staring out of windows then shouting at grown ups who were telling me what to do. I had to eat gruel in one scene, which was actually (as requested), mashed banana and cream. I think my view of the acting profession changed here, as a lot of the adult cast tended to moan about having their kitchens done and talked wistfully of “through lounges”, rather than spouting poetry and wearing velveteen leggings.

There is also Beau Geste, when I played Young Isobel alongside Lucy Benjamin, which involved a lot of running up stairs. Here is a screengrab from YouTube. Classy I know. FYI I am on the right.

As a child I was quite serious and really felt I’d given my all to acting by about 14, and started to write plays instead (I was no puppet!). This led to my first real production, helped enormously by a course at the Soho Poly Theatre, going to Edinburgh when I was 16 – Steven Newman doesn’t Eat Quiche. Liz Carruthers at Mermaid’s Leg productions put the whole thing on. I had a small part in it too. We got some lovely reviews and people came to see it – I was on the radio as a novelty “fringe’s youngest playwright ever” but probably that record has been broken now by a precocious Young Person.